One of the most notable economists and social philosophers of the twentieth century, Ludwig von Mises, in the course of a long and highly productive life, developed an integrated, deduct­ive science of economics based on the fundamental axiom that in­dividual human beings act purposively to achieve desired goals. Even though his economic analysis itself was “value-free” — in the sense of being irrelevant to values held by economists — Mises concluded that the only viable economic policy for the human race was a policy of unrestricted laissez-faire, of free markets and the unhampered exercise of the right of private property, with government strictly limited to the defense of person and property within its territorial area.

For Mises was able to demonstrate
a) that the expansion of free markets, the division of labor, and private capital investment is the only possible path to the prosperity and flourishing of the human race
b) that socialism would be disastrous for a modern economy because the absence of private ownership of land and capital goods prevents any sort of rational pricing, or estimate of costs
c) that government intervention, in addition to hampering and crippling the market, would prove counter-productive and cumulative, leading inevitably to socialism unless the entire tissue of interventions was repealed
Holding these views, and hewing to truth indomitably in the face of a century increasingly devoted to statism and collectivism, Mises became famous for his “intransigence” in insisting on a non-inflationary gold standard and on laissez-faire. 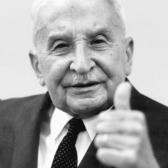 Effectively barred from any paid university post in Austria and later in the United States, Mises pursued his course gallantly. As the chief economic adviser to the Austrian government in the 1920s, Mises was single-handedly able to slow down Austrian inflation; and he developed his own “private seminar” which attracted the out­standing young economists, social scientists, and philosophers throughout Europe.

As the founder of the "neo-Austrian School" of economics, Mises’s business cycle theory, which blamed inflation and depressions on inflationary bank credit encouraged by Central Banks, was adopted by most younger economists in England in the early 1930s as the best explanation of the Great Depression.

The year after Mises died in 1973, his most distinguished follower, F.A. Hayek, was awarded the Nobel Prize in economics for his work in elaborat­ing Mises’s business cycle theory during the later 1920s and 1930s.

There are no pages beneath this page