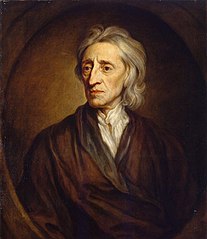 Natural Law/Natural Rights find a prominent position in libertarian thought. John Locke, a 17th century philosopher and physician, "widely regarded as one of the most influential of Enlightenment thinkers and commonly known as the "Father of Liberalism"" took ideas of Natural Law & Rights and ran with them, publishing some excellent material in this area, an area that is one of the core components of The Story of Us.

Wikipedia:
Natural law (Latin: ius naturale, lex naturalis) is a philosophy asserting that certain rights are inherent by virtue of human nature, endowed by nature—traditionally by God or a transcendent source—and that these can be understood universally through human reason. As determined by nature, the law of nature is implied to be objective and universal; it exists independently of human understanding, and of the positive law of a given state, political order, legislature or society at large.

Locke, a church fairing man, took this one step further and postulated that a supreme being, the God component, was not necessary to reason out these laws and rights, rather, observation of the world around us, that is, nature, was more than sufficient to explore this philosophy and draw valid conclusions.

From the Stanford Encyclopedia of Philosophy (emphasis mine):

Natural law is also distinct from divine law in that the latter, in the Christian tradition, normally referred to those laws that God had directly revealed through prophets and other inspired writers. Natural law can be discovered by reason alone and applies to all people, while divine law can be discovered only through God’s special revelation and applies only to those to whom it is revealed and who God specifically indicates are to be bound. Thus some seventeenth-century commentators, Locke included, held that not all of the 10 commandments, much less the rest of the Old Testament law, were binding on all people. The 10 commandments begin “Hear O Israel” and thus are only binding on the people to whom they were addressed (Works 6:37). As we will see below, even though Locke thought natural law could be known apart from special revelation, he saw no contradiction in God playing a part in the argument, so long as the relevant aspects of God’s character could be discovered by reason alone. In Locke’s theory, divine law and natural law are consistent and can overlap in content, but they are not coextensive. Thus there is no problem for Locke if the Bible commands a moral code that is stricter than the one that can be derived from natural law, but there is a real problem if the Bible teaches what is contrary to natural law. In practice, Locke avoided this problem because consistency with natural law was one of the criteria he used when deciding the proper interpretation of Biblical passages.

Moving now to the (Austrian) economists viewpoint, Rothbard puts together this summary:

“Natural rights” is the cornerstone of a political philosophy which, in turn, is embedded in a greater structure of “natural law.” Natural law theory rests on the insight that we live in a world of more than one — in fact, a vast number — of entities, and that each entity has distinct and specific properties, a distinct “nature,” which can be investigated by man’s reason, by his sense perception and mental faculties. Copper has a distinct nature and behaves in a certain way, and so do iron, salt, etc. The species man, therefore, has a specifiable nature, as does the world around him and the ways of interaction between them.

To put it with undue brevity, the activity of each inorganic and organic entity is determined by its own nature and by the nature of the other entities with which it comes in contact. Specifically, while the behavior of plants and at least the lower animals is determined by their biological nature or perhaps by their “instincts,” the nature of man is such that each individual person must, in order to act, choose his own ends and employ his own means in order to attain them. Possessing no automatic instincts, each man must learn about himself and the world, use his mind to select values, learn about cause and effect, and act purposively to maintain himself and advance his life. Since men can think, feel, evaluate, and act only as individuals, it becomes vitally necessary for each man’s survival and prosperity that he be free to learn, choose, develop his faculties, and act upon his knowledge and values.

This is the necessary path of human nature; to interfere with and cripple this process by using violence goes profoundly against what is necessary by man’s nature for his life and prosperity. Violent interference with a man’s learning and choices is therefore profoundly “antihuman”; it violates the natural law of man’s needs.