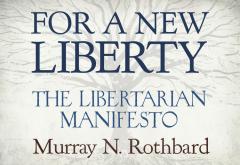 As I mentioned on the about page, I've never been one to follow, or belong to, any political party, nor consciously adopt any sort of ideology one way or anther. Things have changed somewhat for me since I came across libertarianism, particularly Murray Rothbard's vision of libertarianism. The first big appeal: libertarianism is more a pure ideology and much less a political entity. In fact, Rothbard is adamant about reduction of govt to virtual non existence. Secondly is the devotion to personal liberty, to freedom, uncompromisingly. Rothbard's vision has all the underpinnings mapped out and ready to roll, so I do rely heavily upon him to outline what really looks to be the only pathway that is going to work. Given that the last couple thousand years of govt haven't been a smashing success, really, trying something based on freedom can't hurt!

The libertarian approach (with strong input from the ideas of Austrian economics) kinda strikes me as a race without the race bit, where every human gets to line up at the starting line, every human has that right based on Natural Law, cemented by no authority that can grant further authority to one human over another and thus preventing their ability to line up at the starting line. Once the start is called, the ‘race’ proceeds as each participant sees fit with the participants moving as fast or slow, as far or close off that line as they want to, unhindered by anyone else. Now, this must definitely not be seen a providing free rides for those folks looking to put in very little effort. By the same logic as the right to line up, each human is also responsible for their own uncoerced choices and actions, inaction being a choice & action in and of itself. There is no boohooing if you don't have what someone else has simply because it was too much effort in your view. Converse to this, no other human bears a responsibility to any other except by way of uncoerced contractual agreement (parenting could fall in here too, but that's a separate discussion) or of restitution in the event of crime and conviction.

This personal responsibility for action extends across all of our existence and everything that each one of us do.

The ideas of libertarianism and libertarian thought currently hold some differences of agreement in a few areas of our society. For example, some libertarians feel govt should be kept around, just tightly controlled. Other differences include abortion, the death penalty, natural resources and so on. Personally I subscribe to most of what Murray Rothbard has laid out in his book For a New Liberty - The Libertarian Manifesto which, IMHO, blends well logic, ideology and much of what Austrian School economists teach, particularly Ludwig von Mises. I feel that libertarianism and Austrian economics are two branches on the same tree as both deal with the human condition and human action. Libertarianism is somewhat different though in that it could be considered a set of principles of human's action whereas Austrian economics only focuses on the action itself, not the reasons behind it.

The intent with this section is to lay out the logic as much as possible so you can formulate your own thoughts and opinions. There are two themes that must permeate all versions of libertarian thought however and without them first and foremost, an ideology cannot really be considered libertarian. Those themes are personal liberty and private property rights, including the private property right in one's own body.