Why do we need money anyway? 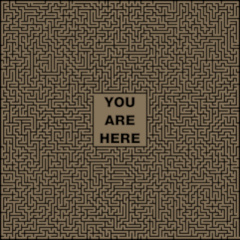 Like many others, I too reckon the monetary system has been designed and/or evolved to be extremely complicated in the hope that you won't see through the façade, you won't recognize it for the scam that it is. Our first stop though needs to be the past as history provides the understanding of where and how money came into being, a little bit of introduction as it were.

Humans are predisposed to exchange goods and services in order to survive beyond a very meagre subsistence level - if at all - as it is virtually impossible for individuals to acquire/manufacture all that is needed for their existence on Terran 3. The basic nature of this exchange we refer to as barter: the direct exchange of one good for another. The problem with this system and why it is no longer widely used is what is termed as the (Double) Coincidence of Wants.

Suppose Mary has a supply of eggs for sale and is looking to get a pair of shoes in exchange. Sally has shoes she is willing to part with, however has no interest in eggs, only in a lawnmower. This exchange will therefore not take place. Mary now needs to find someone who is interested in eggs AND has a lawnmower to exchange in return. As we can see, it won't take very long for this process to become very unwieldy and dysfunctional. The solution then is indirect exchange, that is, some common good that is accepted as a store of value by all in the marketplace. Mary can then exchange sell her eggs to Larry who exchanges an amount of this common medium in return. Mary then takes this good to Sally and exchanges it for the shoes. Mary does not accept this commodity, say feathers, for its own use value to her but rather for its exchange value in her quest for shoes.

Taking things a step further then, another example: you require a replacement washing machine which a friend of yours has. This same friend requires a replacement dryer which you happen to have. The setup is exactly the same as each of you going out to buy a replacement from a store with one added value proposition: if purchased from a store there still remains the task of getting rid of the old appliances; in direct exchange this is a built in feature.

Righto, as you each have what the other requires, an exchange works great here, a barter or direct exchange of goods and services. The one key component you are each missing however is a truck or method of transport to complete the transaction. The appliances are too heavy to lug across town by hand and putting wheels on 'em to ride home is generally frowned upon.

This individual has a truck which is perfect for your needs. Unfortunately though this person does not require a washer, dryer or anything else that you or your friend have; your assets contain nothing of value to him/her. This is where barter breaks down.

Enter money AKA medium of exchange.

By giving person C a piece of paper which they can redeem for goods or services elsewhere in society, we are now facilitating the exchange of the washer & dryer thus completing the transaction. It's important to note here: the piece of paper in this example does not have to be a govt group decreed money! It can be ANYTHING that has value for person C: oil change coupon, a gift certificate at a local eating place, ticket for free ride(s) at a carnival, case 'o beerverage, the sky is limit.

**** The important conceptual point here is that it's not about acquiring the piece of paper, the money, it's about the exchange of the washer and dryer, period. ****

Ok, we've established the major limitation with direct exchange so how do we get around this issue? The evolution of money begins…

At this point it's probably best to fine tune some definitions to help with clarity. Five important ones are noted next. I'm going to borrow a couple of formal definitions from the Mises Institute in an effort to avoid my sometimes clear as mud ones; understanding is important here.

commodity:
“A commodity is a basic good, material, or product that is produced in very large quantities and is usually sold in raw or only partly processed form. The most common commodities are essential agricultural products such as wheat, sugar, rubber, and coffee and basic mineral-derived products like copper, tin, or silver. On a more general level, a commodity may also be any manufactured product — for example, computer chips — that has become so common or inexpensive in design or manufacture that it is almost impossible to tell the difference between two producers' versions of that commodity.”

currency: this is a physical representation of the idea of money. Paper bills as an example. There can be some overlap here, both a money and a currency - coins come to mind: they were/are fashioned from a valued commodity.

medium of exchange:
“People wishing to achieve their ends often have to trade. They can exchange their goods directly, if they have matching preferences and suitable goods, or indirectly, with the help of another good - the medium of exchange.”

money:
“Money is a commonly used medium of exchange.”

use value: refers to the commodity which can or will fulfil some human want or need outside of exchange; it serves some useful purpose itself. For example, while salt was once used as money we don't normally anymore. Instead it is purchased/traded for its use as a seasoning/preservative for food; the value lies in its consumption.

The first thing we can notice is how simple it all really is. All the cow crap complexity: simply a system, one that has been created/wrapped around the concept of money and the exchange of goods & services. Not much behind the curtain is there? Cool thing with human systems: they come and go meaning this hunk of junk can be scrapped, a new one put into place. That's getting ahead somewhat though, discussion for another chapter.

So we have to start somewhere when it comes to leaving direct exchange behind. With the exception of gifting for example, in order for a human to give or exchange something that has value to them they need to receive something of value in return. If direct exchange is not possible, indirect required, it is not likely that one or the other side of the transaction is going to part with their asset for just a thank-you card or a hand written piece of paper that one of the parties says can be used in exchange somewhere else - local diner for a sandwich as an example “just take this to Bob's Deli, tell him I sent you!”…uh-huh, got swamp land too?

Here's where the idea of medium of exchange is born: the item used as the indirect exchange facilitator must have value to both sides of the transaction. The reason(s) for that value perception is irrelevant, it can be a simple as thinking the colour is pretty. The fact that it's valued is what matters.

How did it come about?

At some point in our history, there doesn't appear to much recorded on this topic, the problem and limitation of direct exchange was recognized and other commodities emerged as mediums of exchange: shells, feathers, spices, livestock, tobacco to name a few. Some worked OK, others not so much for reasons that will become clear further in this section. Using multiple intermediaries has its own issues however, the double coincidence of wants was simply pushed further up the chain when different societies attempted trade: I use shells, you use feathers, neither of us recognizes the value of the other's money, stuck.

Over time, two metals solidified themselves as commodities in wide demand that were also valued as mediums of exchange, those being gold and silver. Humans have placed a value on these two metals for ages, perhaps since their respective discoveries. They contain both psychic value (pleasure/happiness/mental gratification, etc.), jewellery for example, as well as practical value, electronic and medical products. Both also meet the criteria of successful currency, more on that later.

At this point, let's take a big picture at money and banking via Paul Grignon's Money as Debt series. (running time 6:18min) From here I'll break things apart and we can look at each individual component.