Imagine an ordinary person sees a headline like this over her morning coffee: "Your City Will Soon Be the Homicide Capital of the World." But, upon further inspection, it turns out the homicide rate is actually very low. What is high is the attempted homicide rate. In the city in question, there has been a rash of assaults and attempted homicides. But for whatever reason, the number of people who actually die from these assaults remains extremely low. Perhaps this is because medical care is better. Perhaps it's because the would-be murderers are poorly armed and not very motivated. But for whatever reason, the actual death rate is far lower than the headline implies. Now, this hypothetical city still clearly has a problem with assaults, and it would be wise to examine why. Attempted murders are not a thing to ignore. However, we could all agree the headline about homicides is quite misleading.

We frequently encounter a problem similar to this with COVID-19 reporting. News stories frequently focus on COVID-19 cases rather than death rates in their reporting. Consider this Reuters headline today: "United States could become coronavirus epicenter: WHO"

The casual readers who skims headlines is likely to take away from this the idea that the United States is following the same trajectory as countries like Spain and Italy when it comes to the COVID-19 outbreak. We have heard that death rates in Italy are alarming in much of Western Europe, and some have claimed the US will soon experience the same fate as Italy. While it is true the United States will soon pass up Italy in terms of total cases, the US is far, far below Italy in terms of its COVID-19 death rate, even if we account for the differences in the timeline.

To see these sizable differences, let's measure COVID-19 deaths the same way we measure homicides: in terms of deaths per 100,000 population: 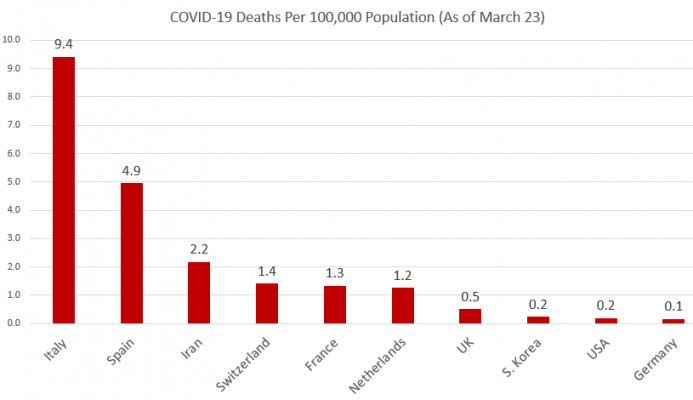 Meanwhile, in the United States, the total is 0.2 deaths per 100,000. Among to the top ten countries in terms of total cases, the US has the second-lowest rate per 100,00, behind only Germany, which has so far a remarkably small number of deaths.

At this point, some observers will say "but Italy has had an outbreak longer than the US, so we must measure in terms of the number of days since the pandemic began in that country."

Well, if we measure from the first day that the United States reported at least 100 cases, we find 19 days have gone by as of March 23. If we take the same top ten countries and look at each one's death rate after 19 days following the 100th case of COVID-19, then we find the US still has the second-to-last rate. 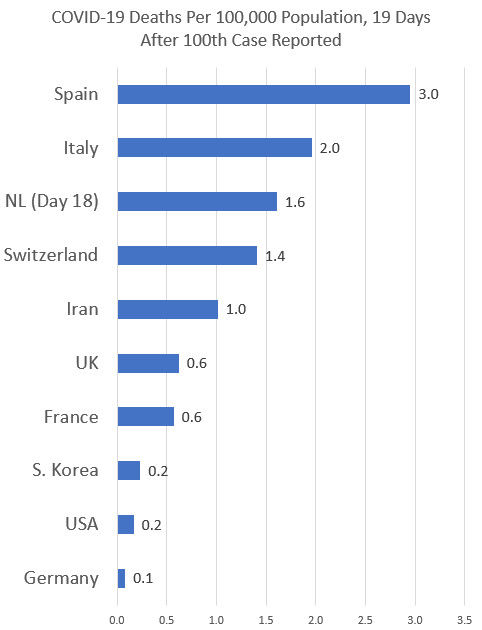 Italy, for instance, reached Day 19 back on March 13. At that time, the country had a death rate of 2.0 per 100,000. In other words, the death rate in Italy on Day 19 was nearly ten times the US death rate on Day 19. Interestingly, Spain fared worse on Day 19 than Italy, and may end up with more deaths per 100,000 than Italy by the time it reaches the same point as Italy. Italy is presently 30 days out from the first day it reported 100 cases or more.

(As of March 24, the Netherlands is only on day 18. All other countries shown here are at least 19 days out since the 100th case.)

Clearly, if these gaps between the death rate in the US and in many European countries persist, it would be quite misleading to claim the "epicenter" of COVID-19 has shifted from Europe to the US. For whatever reason, the deadliness of the disease in the US appears to be well below what it is in Italy, Spain, and even France and Switzerland. This could be due to demographics, the quality of health care, climate, pollution, population density, or other factors. But the fact remains the death rate in the US is lower.

Death Is a More Reliable Measure of Impact than Total Cases

Moreover, problems with data collection suggest measuring by death rate rather than total cases is more useful. Tests are more likely to be performed on people who seek medical care than on people who have only minor symptoms, or none at all. This bias in favor of measuring mostly those with the worst symptoms was identified some time ago, and inflates the "case fatality rate." As more cases become known, so long as total deaths do not grow at least as fast, the fatality rate decreases.

As with data collection in criminology, however, the most serious cases are those which are best counted.1 It has been true for decades, for instance, that records on homicides are far better and more reliable than records on rapes and assaults and lesser crimes. After all, a dead body offers a tangible and objective measure of whether or not a homicide has taken place. And government have long been more concerned with counting homicides than with other crimes. Moreover, witnesses and relatives are more likely to report homicides than lesser crimes.

In both crime and with COVID-19, higher rates may be a result of better observations rather than actual growth in cases. For example, although many studies have suggested the number of rapes per 100,000 are higher now than decades ago, many criminologists are skeptical this is actually the case. It is likely that rapes are just far more often reported today than they were in times past.

Similarly, as better testing is conducted for COVID-19, it only makes sense that the total number of known cases will increase. But this may not be an accurate representation of the degree to which the disease has spread.

So, we know two things are very likely true. One is that the death rate of COVID-19 is lower in the US than at the same point in the timeline for many other countries we are told are comparable to the US. Secondly, we know that death rates are often more informative. This is because testing is more consistent for cases that end in death, while overall case rates depend on conducting tests on those with few or no symptoms. In most cases, people with relatively mild symptoms — which are the overwhelming majority of cases — have never been identified.

(A Note on China: I have not included Chinese data in these comparisons for a couple of reasons. One is that data reported by the Chinese regime may be even less reliable than that reported by Western regimes. Secondly, China is certainly not a model for the other regimes to follow, given China's widspread arrests, and the use of other draconian measures such as sealing people in their own homes. For the record, as of March 23, China's COVID-19 death rate was approximately 0.2 per 100,000, and similar to the US and to South Korea which has employed very different methods for containment.)

(Sources: timelines of total cases used from the "2019–20 coronavirus pandemic" page at  Wikipedia, combined with data from Worldometer.)