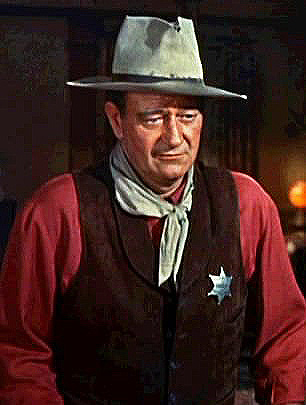 The princesses of the social justice warrior crowd are busy today lighting up the Interwebs, meaning Twitter, raining down all sorts of outrage and destruction on the head of John Wayne. Yeah, you read that right: the SJW Internet mob has now set their sights firmly on a 40 year old corpse.

An almost 50 year old interview with Playboy magazine (yes, apparently some really did read it for the articles ) in which The Dukester's clearly evident racism came shining on through is currently making the rounds. I would wager that most of the ranters and ravers parents were barely out of diapers when the interview was published but that never stopped a good mobbing, so why start now?

The smartest entrepreneurs these days are those in the band wagon manufacturing business.

I'm assuming the next step is to exhume the corpse, reanimate it ala Prometheus and then Hang 'em High…oopps, wrong movie, but no matter 'cause seriously, who gives a shit? I mean really snowflakes, we have got much bigger things to be knot knickering about than what an actor said 50 years ago in a nudie mag. Get a grip already, key grip that is, and have him/her/he/she/it/they/both/neither show you the way 'cause clearly y'all are doing a piss poor job on your own.

The past is a road map, in the modern lingo it's Waze, but it can only show us where we've been and whether that way was red, yellow or green. We do our best to learn from the map and make choices which lead to roads that are mostly green. If we're smart enough, over time, our green percentage grows exponentially. Continually dredging up the past and applying it to the present is at best a fool's game and at worst a guarantee that most of the pathways will be yellow or red…that is if we make a choice at all.

Look over your shoulder from time to time by all means, but for the most part, eyes front, moderate speed ahead and let's get this human race under way!